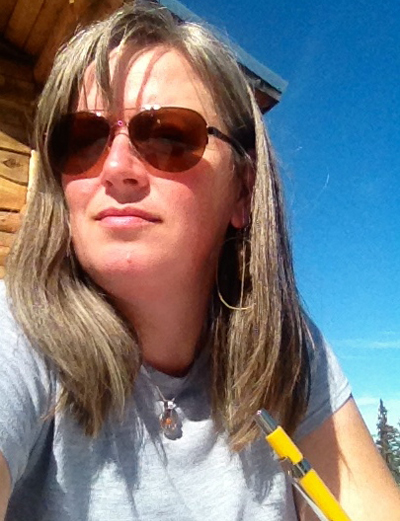 Sometimes you meet a person through her writing, and you just hold your breath and hope she is as incredible in person. I first met Arlitia through her poetry, but as our paths began to cross through the Alaska writing community, I was so happy to learn that she is an incredibly empathetic, generous person, just like her writing. We are so honored that she’s part of Storyknife’s Advisory Council.

A dramaturg in Seattle described Arlitia Jones’ work best when she said “None of her plays are like any of her other plays.” Her imagination is not a room she goes to in her head; rather it’s the whole journey on any path that takes her to a new place. She finds the kernel of story in a women’s running team training to the music of Verdi’s operas, the speechifying of Mother Jones, the legend of Butch Cassidy or the Spirit Photographers of the American Spiritualist Movement in the 19th century.

Jones, who lives in Anchorage, began as a poet. Her volume of poems The Bandsaw Riots won the Dorothy Brunsman Poetry Award from Bear Star Press in 2000. In the years that followed, the voices took over and she broadened into a playwright. Dialogue is fast poetry. Jones is a shameless eavesdropper. She’s a completely unreliable narrator, a world class exaggerator and has a memory like a torn screen–these are her best writerly traits and she incorporates them all to get at the truth. Make that: The Truth. Her latest play, Summerland, will receive its world premiere in January 2017 at Cincinnati Playhouse in the Park. She’s also the founding co-director of TossPot Productions in Anchorage and a member of the Dramatists Guild.

Mother Jones: You’re my guard, are you? Well aren’t I just the fool? Here I thought I was addressing my Maker, the Almighty Lord who’s got the power, if not the authority to keep me locked up in this jail, who has the power to say when I eat and when I shit, when I stand, when I sit, and who I speak to and who I don’t. Used to be before I was put in this jail I had the sun and the moon put up in the sky free for everyone by the King of Heaven and Earth and that’s how I knew when to wake up and when to go to sleep but now I got Lord Shatterprick telling me when to rise and when to fall and, if that don’t sound like someone who thinks he’s God, then I’m nothing but a little ol’ woman who don’t know sick ‘em! But I do know my constitutional rights! (Hellraiser)