The Amazing Erin (I think that’s actually her real name) is even as we speak putting together a Council of Advisors for Storyknife. Allow me to introduce you to one of them.

This is Kathleen Alcalá. She was a co-writer in residence when I was at Hedgebrook the first year it was open (we watched them raise the sixth cottage while we were there), and we have remained friends ever since. She teaches, and she writes magic realism with terrific titles (Mrs. Vargas and the Dead Naturalist is my favorite) and fiction as a product of a fascinating family history where she discovered Jewish ancestors fleeing the Inquisition had resettled in Mexico and gone underground so successfully that she grew up thinking they were Protestant.  She spoke about it on Oregon Public Broadcasting.

She learned that the cruel arm of the Spanish Inquisition reached Saltillo, her ancestral home in Northern Mexico. Her family arrived later, but she says this connection grounded her stew of heritage firmly into real history. Combining her Crypto-Jewish background with her also hidden native Opata ancestry gave Alcalá fodder for a rich trio of novels.

She also has a new book coming out in September. 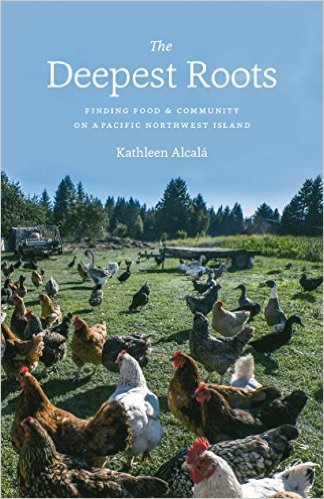 She lives on Bainbridge Island in Washington state and I can tell you she sets a fine table. This book is a result of a years-long investigation of where that food comes from.

In The Deepest Roots, Alcalá walks, wades, picks, pokes, digs, cooks, and cans, getting to know her neighbors on a much deeper level. Wanting to better understand how we once fed ourselves, and acknowledging that there may be a future in which we could need to do so again, she meets those who experienced the Japanese American internment during World War II, learns the unique histories of the blended Filipino and Native American community, the fishing practices of the descendants of Croatian immigrants, and the Suquamish elder who shares with her the food legacy of the island itself.

One thought on “Meet Kathleen Alcalá”