HOMER, ALASKA (April 11, 2013) – Prolific author of the Kate Shugak series of mystery novels and Homer resident Dana Stabenow announced today the launch of her campaign to raise $1 million to build Alaska’s only retreat for female writers, Storyknife Writers Retreat.  Storyknife will be only the second residency of its kind in the world.

To kick off the campaign Stabenow is launching a crowd-sourced funding round on Storyknife’s website, www.storyknife.org, and on her fan sites.   The organization is accepting donations of all denominations but a list of specific funding levels and benefits is also available on the site.

The $1 million fundraising campaign is the first phase in a much larger effort to raise a total of $21 million to cover the costs of developing the property and ensuring its continuing legacy through a $20 million endowment.

THE INSPIRATION
The first thing that Stabenow’s writing ever earned her was not the sale of an article or a book.  It was a residency at the Hedgebrook Farm retreat for women writers on Whidbey Island, Washington in Puget Sound.

The author calls her time at Hedgebrook the seminal moment of her writing career. “It was the first time anyone ever acted like writing was a real job,” she says. Stabenow’s vision for Storyknife is to pass that gift on to a new generation of female writers.

“So far as we can discover,” Stabenow says, “Hedgebrook Farm is the only writers retreat for women in existence.” Storyknife will double the amount of residences available for women writers worldwide, and give women writers a unique space and time to hone their craft.

The Retreat takes its name from the English translation for the Yupik word yaaruin or “storyknife.”  Traditionally, Yupik girls would use yaaruin made from wood, bone, antler or ivory, to carve stories in snow and in riverbanks to amuse and instruct their younger siblings.

Dana says, “I came across mention of storyknives in one of the early explorer diaries and I couldn’t rest until I knew more.  As a traditional Alaska Native vehicle for storytelling, it is the perfect metaphor for what we hope to accomplish at Storyknife. I’m hoping we get a lot of Alaska Native women writers applying for residencies at Storyknife, too.”

THE RESIDENCY
Writers will be admitted to the residency after a rigorous application process, including statements of need and samples of work.  Upon successful admission, writers will come to Storyknife for two-to-eight-week residencies to focus on their diverse projects in uninterrupted peace, an atmosphere made possible by the Storyknife endowment.  “Following in the tradition set by Hedgebrook,” Dana says, “Storyknife residents will not be allowed to wash so much as a teacup. Their job here will be to write.”

With the exception of travel to and from Anchorage, all expenses for writers in residence will be covered, including a specially curated Alaskan adventure of each writer’s choosing.  Examples of these once-in-a-lifetime experiences include halibut fishing, ocean kayaking, bear viewing, and flight-seeing.

Sustainability and supporting local economies will be an ongoing focus for the Retreat.  Meals will feature produce from the property’s own garden, with locally supplied moose and salmon as other culinary mainstays.

Throughout her career she has amassed critical, public and civic acclaim, most notably the Edgar Award for Best Paperback Original for A Cold Day for Murder in 1993 and being named Alaska’s Artist of the Year in the 2007 Governor’s Awards for the Arts and Humanities. She won a 2012 Nero Award for literary excellence in the mystery genre for Though Not Dead.

About Storyknife Writers Retreat
Storyknife Writers Retreat is a non-profit organization with the mandate to build and operate a retreat and residency program in Homer, Alaska for aspiring female writers.  Its 501(c)3 application is pending.  Founded by author Dana Stabenow, Storyknife will double the residencies available exclusively to women in the literary arts, from six cabins (Hedgebrook Writers Retreat) to twelve (Storyknife).  The organization is managed by a board of directors and is funded through the support of donors.  To make donations or learn more, visit http://www.storyknife.org.

Before full funding is acquired:

After full funding is acquired:

The project can be completed in one 6 month building season. The main focus would be to get the structures enclosed during the summer weather with interior finishes in the fall/winter.

Dana adds, “This is predicated on the hope that we get enough funding for construction in the next three months. If we don’t, the timeline gets pushed back a year.”

Dana Stabenow – Founder
Dana is the author of twenty-nine novels, fifty columns and many feature articles for Alaska magazine, many short stories and essays, and blog posts too numerous to mention. She lives in Homer, Alaska.

Nathan is the Founder and CEO of Thrive Consulting Group, Inc.  He specializes in creating effective communications and press outreach strategies for small and medium sized businesses, not-for-profit organizations, and political campaigns.

Scott is a licensed, bonded general contractor with a Residential Endorsement who has been building in the Homer area since 1988. Projects include 36 single-family homes, an art gallery, a fishing lodge, a racquetball court, a dental clinic, and numerous renovations and additions.

A storyknife is the English translation for the Yupik word yaaruin.  Traditionally, young Yupik girls would use yaaruin, made from wood or bone or antler or ivory, to carve stories in snow and in river banks to amuse their younger siblings. The stories were usually teaching stories, which featured children who disobeyed their parents and who were then killed and eaten by monsters.

Dana says, “I came across mention of storyknives in one of the early explorer diaries (I think it was Dall), and I couldn’t rest until I knew more. Since then I have featured storyknives in the Kate Shugak series and the Liam Cambell series and even in the Star Svensdotter series. As a traditional Alaska Native vehicle for storytelling, it is the perfect metaphor for what we hope to accomplish at Storyknife.”

This is the storyknife made by Alaskan artist Rick Lonsdale and given to Dana by her best friend Kathy just before they went downstairs to attend the Edgar awards ceremony in New York City. 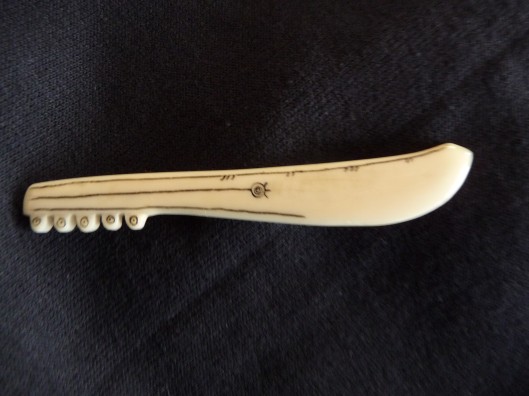 Dana was wearing it when she won her Edgar for A Cold Day for Murder.

And it is now the logo for Storyknife Writers Retreat.

Our Non-Profit 501(c)(3) application was filed in mid-January, 2013.  The average time for applicants to hear back from the IRS is 3-6 months.  Any donations we receive before we are awarded non-profit status are not guaranteed to be tax deductible.  IF our 501(c)(3) status is awarded before the end of the year (which is likely) the ‘effective date’ will probably be the filing date (mid January).

Assuming that happens, donations given now should be tax exempt, but we know sometimes stuff happens, and it might not be.  We are trying to be transparent in all things as we go through this process so we will keep you informed of our progress.

If you are interested in supporting Storyknife, you can either sign up to be notified when we have received our 501(c)(3) status and your donations will be tax deductible, or you can give now if you either don’t care about or are willing to take a small chance that your donation may not be tax deductible.